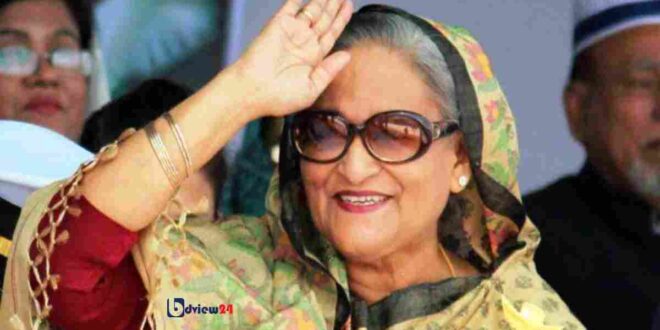 Prime Minister Sheikh Hasina, who is heading the Bangladesh government for a record third consecutive term, has turned 74.

The eldest among Bangabandhu Sheikh Mujibur Rahman and Bangamata Sheikh Fazilatunnesa’s five children, Hasina was born at Tungipara in Gopalganj on Sept 28, 1947.

In a message congratulating the prime minister on her birthday, President Md Abdul Hamid recalled the hurdles she had to overcome despite being the daughter of the Father of the Nation.

To mark the day, the Awami League will hold a discussion at Bangabandhu International Conference Centre. Other programmes will mainly include special prayers as the party asked its workers to follow health rules strictly during the celebrations. The government will vaccinate 7.5 million people on Tuesday to celebrate her birthday.

Hasina lost almost all of her family members on Aug 15, 1975, but she and her sister Sheikh Rehana escaped the carnage as they were abroad at the time.

Barred from entering Bangladesh for a long time, Hasina was elected president of the Awami League in absentia in February 1981. She returned home on May 17 the same year.

She spearheaded the Awami League’s successful campaign along with other political parties and alliances to restore democracy in 1990.

Hasina was at the forefront of her party’s movement to bring down the BNP government, culminating in the Awami League victory in the 1996 elections. She catapulted the Awami League to power again after the 2007-08 military-controlled government.

Since being elected head of the government for the second time in 2008, she has been spending her birthday in the United States almost every year as it coincides with the United Nations General Assembly.

She celebrated the occasion in Bangladesh last year as the UNGA was held mostly virtually due to the coronavirus pandemic and Hasina delivered her speech via a video call. This year, she travelled to New York to join the UNGA.

The Awami League has formed government four times with Hasina as prime minister. This is her unprecedented third consecutive term as the head of government.

She started her career as a politician when she was a student of Eden Women’s College in the 1960s. She was elected vice-president of the Eden College Students’ Union in 1966-67 as a Chhatra League candidate.

She was general secretary of the Chhatra League’s Rokeya Hall unit when she was a student of Dhaka University. She graduated from the university in 1973.

During the Liberation War in 1971, she was in captivity along with her mother, sister Rehana, and youngest brother Sheikh Russel.